Psalms, Yawps, and Howls is a writing website of Daniel Eugene Wilcox, a writer, poet,
and kickabout traveler of the mind, human history, and the world.

upending my camping mug
for a drink,
at dawn,
but no water slurp;
almost empty--

except for a gray web’s net
rim to rim;
below, a dark spider
silent dwelling
--

Retreaded, not yet board and carded

I’m retreaded but road-tired,
Rolling across cantankerous land
Though, thank heavens—knock around
On pavement
And redwood,
Not yet sent off to a ‘board and card’ mansion,
Rehearsing...

Or where, too
Reclining and breathing entertain you/us.

Or tipped-wobbly with 4-wheels and unfeeling-ed feet
I walker about at Morro Strand beach-coast
Staggering in wonder...
Here
Until my brief spark of awed experience embers out

Yet
This cosmos Ultimately
Transcendent
-

On more days and nights, an invalid,
In pain and loss, I often just want to go…
Unconscious;
But then, again, I stare out
To the wind and sun
From our upstairs
Window;

There tower above, 2 lone palms
In sight from my weak haven,
Swaying in that blue expanse
In a lively coastal wind,
Their mop-tops of slender fronds
Shimmering
Like flashing magnesium flares
From brilliant reflecting
Sunshine.

Yes, the wonder of being a human primate
Living, but finite, so brief, and this
Gift, this Present
Shimmering--
Then we’re gone.

Wrong right-leftist spinners,
Those creedalists and secularists
Both deniers of the morally real--
Their abyss of modern sheol winter
Stop!
Abandon this somber cellared lament!

Instead,
My sweetheart suggests, Let’s visit
A coastal winery,
Say, I do,
We do.

Driving along a winding river valley,
We arrive, expectant,
Hoping for respite;
Then, listening to soft music,
Sipping small glasses of moscato and merlot

After Thanksgiving before winter;
We bask in 86-degree warmth,
When unexpectedly a slightly curled
Leaf floats down before
My eyes,
And lands gently on my lap,
A died wonder for us to behold;

Then another drifter
Lets go from a large limb above,
A deep rust-brown leaf spattered
With light tan highlights and vein-lines,
Descends in front of us,

Swaying back and forth,
Languid,
Lightly
Floating down
Inches away from us,
Landing nearby
On the lawn;

I lay with my head way back,
Gazing up to the sky's azure blue,
As other gifts let go every few moments
From high above,
Swinging wide and graced,

Falling beauty in slow motion,
Floating, swaying;
I realize—here, now--
With this Present--
I could die free, released.

October 2021:
​
Hearts-full, Not location or creed

But Evangelicals live for US First
They're group-egotists, of that proud sort

But down below, poor refugees get Walled out
Live in patched together plastic tents,

Preyed upon by ruthless cartel killers;
Near their shack and Jesus church of prayer

There peasants, Manuel and Miriam grow
Food on their small acre of stony ground,

Not Evangelicals! those proud braggers
Lost from love’s generous kind country.
​
--
MAY 2021:

wearing my fiery red shirt
for Christmas, I open our
sliding glass door;
sudden jolt in front
of my startled face--
a flash of feathers hum-buzzes,
darts within inches of me;

side of the road

fall back to autumn 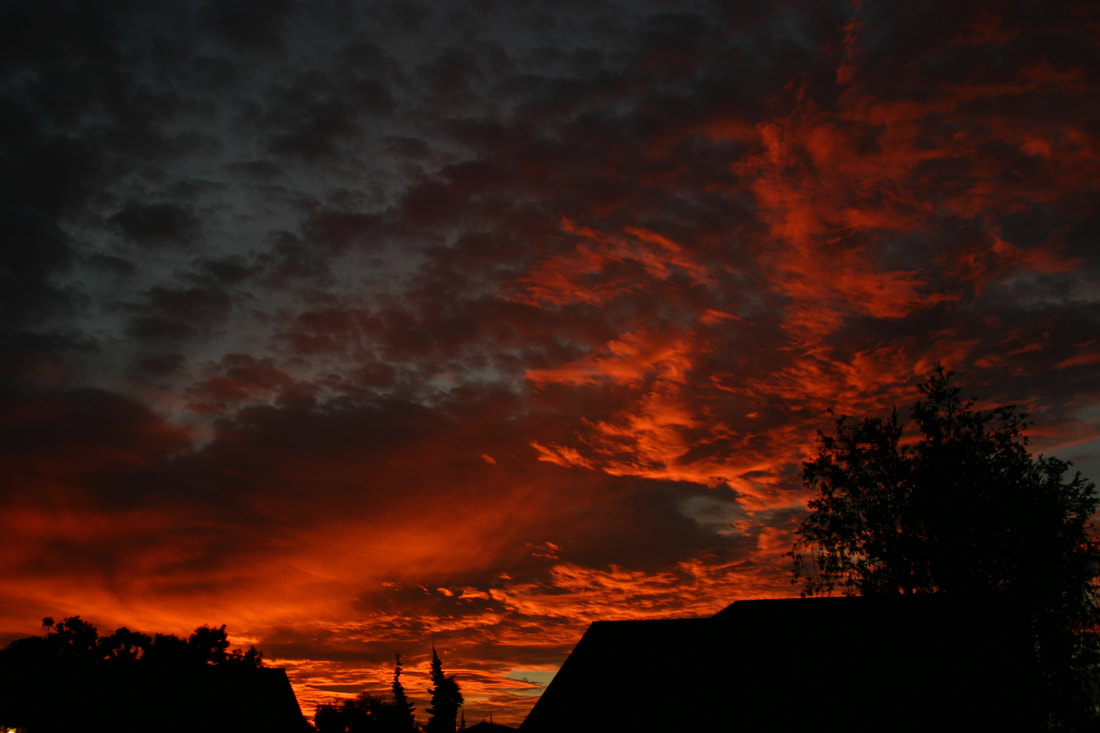 bidingTImeabiding
​
A Psalm of Late Life
--

As a kid, expressive, creative, rambunctious,
something of a wild card
long into adulthood
I loved vibrant Green--
for abundant life, for exuberant energy, vividly alive
for beauty like in colors, emerald or jade,
for the natural world from creek to patch of woods
behind our house on the edge of Adams village,
to verdant forest green glens of the Sierras, Sequoia and Yosemite

But--
then, suddenly, unexpectedly, without conscious why;
spontaneous, impulsively one day in middle life,
I awoke
not liking green anymore…
viewing green instead as dull, insipid,
sickening, repetitious, odd,
over-done, humdrum…

Color me fiery Red--
riveting, intense, striking sparks of light
cardinal, crimson, scarlet burst into my eyes and consciousness
—passionate, dazzling, blazing, heated, different…
as in exploding firework sky rockets,
as pulsing red coals in a bonfire,
as an amazing psychedelic quilt by my sweetheart
like an Impressionistic painting, luminous in our house
to ruby red lava in Hawaii’s volcano, intense sunsets,
​and Utah’s red rock

In the fall a time for springing
childhood,

festivals of Monet-splashed leaves
that my sister and I raked and piled high
in the deep ditch in front
and jumped down into,

and our large garden behind the parsonage
with pumpkins, melons, and withered corn rows...
​
and lightning bugs on the wane,
flashing on and off

A Psalm of Late Life

Pessimist of my oldering years
Preyed upon by lamentable loss
I find no balmy psalms to lyre
But after discovered liars
Only this harp
of yawps and howls,
I pray for transcendence,
​This my modern yelled holler
My psalm of life end's exit
Dance in this sorrowing starred night

bite my teeth on famous lines
a hole lot of fragmented shells;
hunger hollows within--
deepening abyss
of lost longing
lone-ranging, reigning the distance
of a round heartless night

of a round heart-last light
lane-ranging, raining the day-stance
of last longing
steepening a-bless
fulness hallows within--
a whole lot of fragranced shalls;
bide my heart on famous lines
--

at the park's bat box

When flailed, blind-sided,
Going down fast in
A basket abyss shrivel of worth-loss
And hope fails all drowned,
Do we launch deeper into the Deep?

Do we weep,
Do we shrive?
Thrive?

For in every crisis
Chry-sal-is*

Even in the worst, most evil events, each of us still has the difficult possibility of heeding Viktor Frankl’s shocking words about their horrific experiences in Auschwitz Concentration Camp:
“Between stimulus [even trying to survive at Auschwitz!] and response
there is a space.
In that space is our power to choose our response. In our response lies our growth and our freedom.”
“As we see it, an analogous relationship between the realm of human freedom and a realm superior to man is quite imaginable, so that man is endowed with free will...”
Viktor E. Frankl
“(26 March 1905 – 2 September 1997 was an Austrian neurologist and psychiatrist, and a Holocaust survivor, of Theresienstadt, Auschwitz, Kaufering and Türkheim. Frankl was the founder of logotherapy (literally "healing through meaning") a meaning-centered school of psychotherapy…part of existential and humanistic psychology theories. He is the author of over 39 books; he is most noted for his best-selling book Man's Search for Meaning based on his experiences in various Nazi concentration camps…
In 1941 he married his first wife Tilly Grosser, who was a station nurse at the Rothschild hospital. Soon after they were married, she became pregnant but they were forced to abort the child. Tilly died in the Bergen Belsen concentration camp. His father Gabriel died in the Terezin concentration camp (Theresienstadt) in 1942. His mother and brother, Walter, were both killed in Auschwitz
Bio from Wikipedia


March 2019:
I became a beachcomber of beauty

A Twist of Words


January 2019:
my gramma's beheading like the results of Dort

September 2018:
mused moments in nature
including

side of the road mailbox

The Signal of the Flag
http://deadsnakes.blogspot.com/2015/08/daniel-wilcox-two-poems.html﻿


The Wind Blew Away the Young
(Dedicated to Kurt Vonnegut)
First pub. in Mad Swirl

Film Over Our Eyes
First pub. in Camel Saloon

October 2014:
RELEASE OF KINDLE VERSION OF THE FEELING OF THE EARTH

July 2014:
If you haven't checked out any of my other creative websites, hark over to them:

http://lightwaveseeker.weebly.com/             More Poems and Stories, Light in the Darkness

Use Your Head
First pub. in Unlikely Stories IV

JANUARY 2014:
THE FEELING OF THE EARTH
A Speculative Novel of the Past and the Future

Short story, "The Gift,"  in Scattered Hearts: An Anthology
and available on the website

Shell Casings
First pub. in different form in The Recusant


Outside the Limit
First pub. in Flutter Poetry Journal

End of a Rope
First pub. in The New Verse News


The Mystery of Modern Life


And many more before. Do a Google search and find more washed up pieces of his poetic driftwood on the vast shores of the Internet.

There are 3 collections of Daniel's published poems,
Psalms, Yawps, and Howls,
Dark Energy
and selah river.
All 3 areavailable at Amazon, Barnes & Noble, local bookstores, and coffee shops.
For Daniel's speculative writing, futuristic poems and stories warp over to
http://lastthings.weebly.com/.

A Song of Songs

Caught in the Act
in Iraq

A Twist of the Words

http://www.frostwriting.com/issues/article/cold-as-hell/
First pub. in The Externalist

The Slowness of Danger

Under the Big Sky

A Song of Songs

The Shell Zebra Mussels In

The Lady in the Garden

The Possibility of Suburbia

'Lying' on a Bed at a Slant


From Below
the Line

And in the book Dark Energy


I Love You Flannery
O'Connor

And in the book Dark Energy


The Essence of   Software

​Three large collections of his published poetry are in print: Dark Energy,
Psalms, Yawps, and Howls, and selah river.  And a speculative novel, The Feeling of the Earth, one of alternate history and futuristic science fiction.

Before that, Dan hiked through the University of Nebraska, Long Beach State (Creative Writing), Montana, Pennsylvania, Europe, Palestine-Israel, Mexico, Canada, Arizona, and many other states.   Now he resides with his quilting wife on the central coast of California. Life gets  difficult in elder age as I got a stroke of bad luck, so am mostly house-bound. But as circumstances get tough--we MUTANTS  get tougher:-).