Writing to be Published: 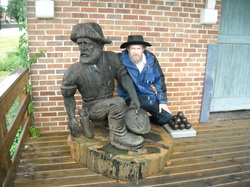 ​Three large collections of his published poetry are in print: Dark Energy,
Psalms, Yawps, and Howls, and selah river.  And a speculative novel, The Feeling of the Earth, one of alternate history and futuristic science fiction.

Before that, Daniel hiked through the University of Nebraska, Long Beach State (Creative Writing), Montana, Pennsylvania, Europe, Palestine-Israel, Mexico, Canada, Arizona, New Mexico, Texas, Oklahoma, Florida, Michigan, Wisconsin, Minnesota, and many other states.   Now he resides with his quilting wife on the central coast of California. Life has become difficult for Dan after he got a stroke of bad luck in 2019. But as circumstances get tough--the answer is for all of us to get tougher:-).

​
PREFACE and WRITING BACKGROUND from my 3 Poetry Collections of my Magazine Published Poems in the U.S., Canada, and overseas:

Preface is based in Latin--"spoken before;" or one could imagine with e.e. cummings that a preface is a pre-face, the face one used to have before the publication of these poems.

Time-travel back to Nebraska in the mid 1950's and observe his face as a young enthusiastic author, penning with scribbled scrawl my first creative writing, mostly short stories, many pages piling up, and then in his senior year of high school winning a national writing award.

Moving to California at 19, in 1966, he majored in Creative Writing, earning that degree from Long Beach State. There creative professors including Hermann and Lee helped guide him closer to the muse, and pruned excess and errors. But don't blame them for any weaknesses or mistakes still in these poems and stories.

​Dan  says, "I take all the credit.;-) They were excellent teachers, along with many writers such as Edgar Allen Poe, Sidney Lanier, e.e. cummings, Edna St. Vincent Millay, Emily Dikinson, Walt Whitman, Amy Lowell, the Beats, Carl Sandburg, Coleridge, and Donne.
Though, of course not done--to quote one of Donne's poems--listing contributors to the development of my writings. I would also need to thank my American literature teacher, Ms. Haskins of Lincoln Southeast High School, for inspiring and encouraging my writing."

"So not quite finished--quiet, no quipping, yes. Here are some previously published poems that appeared in various magazines in the U.S., U.K., Canada, and overseas elsewhere. Thanks to those magazine editors who accepted my lines so that they could wander and wonder across their digital and print pages, headed through life's maze toward the distant future."